This is an old archived page. Check out the latest [here].digibutter.nerr
It's Hi-Technicaaal!
Amazon Fire TV games work with other Bluetooth controllers
- Like? 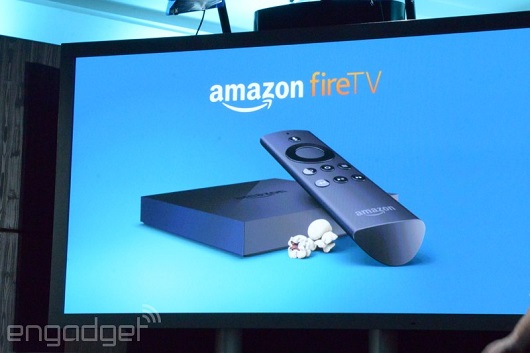 * https://developer.amazon.com/sdk/asb/json-config.html
* https://developer.amazon.com/sdk/asb/input-mgmt-games.html
* http://www.joystiq.com/2014/04/02/amazon-fire-tv-games-can-use-other-bluetooth-c...
Amazon just revealed its $99 Fire TV game and video streaming device today, and unveiled a $40 Bluetooth game pad to go along with it. As it turns out, developers appear to have the option to make their Amazon Fire TV games compatible with other controllers.

"I don't have the full data set, if any is the right term. Generally speaking, it's a Bluetooth controller," Mike Frazzini, VP of Amazon Games told Engadget today when asked about the Fire TV's controller support. "And the same thing vice-versa. Third-party controllers can work on Fire TV as well."

According to a mandatory configuration file for all Amazon Fire TV game developers listed on Amazon's site, developers must note if the app "supports a game controller, either the Amazon Fire game controller or a Bluetooth game controller from another manufacturer." While Amazon doesn't confirm official Fire TV support with the game pads, other Bluetooth controllers like Nintendo's Wii Remote and Sony's DualShock 4 could feasibly work with some games if developers so choose.

Likewise, while the Amazon Fire TV supports up to seven Bluetooth game controllers simultaneously, software development kit documentation notes that "only four of those controllers are assigned to player numbers." This seemingly caps local multiplayer gaming on Amazon Fire TV at four players at a given moment, which may not be an issue since gaming is more or less a "bonus" for the streaming device.

Looks like Amazon has already taken down the page that explains how to define the controllers.json Controller Configuration File. Not sure what it's means, but I can't find info on it anywhere else on the Internet. The app submission section claims the file is needed. Do you still have the page, the first URL you list, cached?

I would think the Amazon Fire TV SDK Add On would include all the files needed, or it would be in the Samples.
>>

I thought so to, but the samples with the sdk add-on do not come with controllers.json. Maybe amazon has decided the file isn't needed. Supporting any  an all blutooth controllers is the best way anyways. I'm wondering what the original web page said.