This is an old archived page. Check out the latest [here].digibutter.nerr
It's Hi-Technicaaal!
Infocom's Hitchhiker's Guide to the Galaxy playable for free online
- 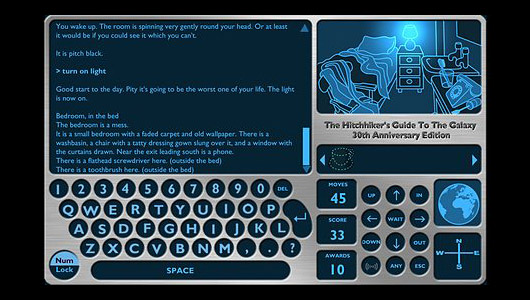 Designed by "Hitchhiker's Guide" author Douglas Adams, Infocom's game mixes humor, sci-fi, and frequent player death for an experience many regard as a high point in the text adventure genre. The BBC's latest adaptation follows up on a previous 20th anniversary re-release, and boasts improved in-game navigation along with a virtual keyboard suited for touch screens.

If you plan to play through this one, remember to save frequently. That bulldozer is a killer.