It took a little longer than expected, but I finally got this thing up and running. I don't plan on renewing unless you guys keep playing, so it's currently set up to run over the next month. Though I don't think I can enforce it, everyone starting fresh so we're all at the same point would probably add to the effect.

I'll check it out once the stable update goes live

The subscription for the current game has expired, but it's easy enough for me to re-purchase if/when people are interested. There are already lots of things in Starbound. Even in beta, the game is a vast sandbox of possibility and weird cave-dwelling gum creatures that shriek and bounce at you like a pogo stick possessed by the soul of a deathrow inmate. It’s a big place, but this is only just the beginning. Previously, developer Chucklefish wriggly giggled out word of directors, mods, and a PVP endgame, but those lofty goals are in the far flung future. On the horizon, meanwhile, is a complete overhaul of the infinite voxel universe’s progression system, which is currently just a series of intergalactic gates. The plan, however, is to make it more like a Metroidvania that will ultimately split off into three main paths: adventuring, building, and farming. I can’t wait to have my own corral of horrifying night terror space sheep.

* http://kotaku.com/starbound-bans-sexual-predator-1520228468
The developers of indie PC hit Starbound have had to call the authorities after it was discovered a sexaul predator was using the game to "target children".Read more...

Starbound is absurdly popular, which leaves people dying to know where the space exploration/crafting/fighting game, currently in alpha, is going to go next. Rather than drip that information out over a period of months with incrementally more revealing trailers, developers Chucklefish have just done big ol’ blog post full of information. Future features include: sweeping changes to the progression system; a PvP endgame set in ‘Sector X’; Director Mode, which lets you act as a kind of dungeon master; support for sharing user-made missions; and mods.

Oh, also Chucklefish themselves are opening an office, making a new game, and publishing a bunch of other people’s games. Geez. … [visit site to read more] Starbound Wipes Out Character Wipes With Huge Update
- Like?
rockpapershotgun.com

I had a Starbound character once. His name was Sir Face (named after the Microsoft Surface I was playing on at the time; it’s a long story), and he was a mohawk-sporting robot who punched bird people, stole their super cool altar beds, and did not give one single, solitary *crag*. But he’s gone now. Forever. Beta tests are harsh, uncaring things, and I knew that Sir Face and I wouldn’t be able to dance among the stars (and also mine them hollow) forever. I still miss him, though – at least insofar as one can miss a walking trophy case for their videogame accomplishments. Fortunately, as of now I’ll never have to grieve for another Starbound character again, and neither will you. The game’s latest update should be the last one heralded by a character, ship, and planet wipe. Also, it adds crazy new enemy attacks, a permadeath option, new items, new biomes, and tons more. But oh man, characters don’t eat bandages anymore! I liked eating bandages. 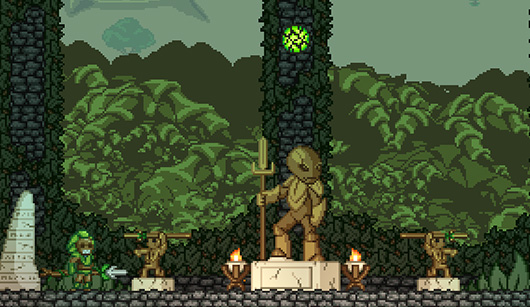 * http://www.joystiq.com/2014/01/27/starbound-players-need-no-longer-fear-characte...
Those brave souls building a pixelated life for themselves in the Early Access version of Starbound have less reason to worry that the game's servers might periodically delete their favorite explorer. This past weekend's update took care of that glaring issue.

Adorably titled "Furious Koala," the update brings a host of changes to Starbound. Most are the typical attempts at polishing the 2D sandbox exploration game, but the highlight of the list is word that developer Chucklefish Ltd. has instituted "[a]bsolutely massive changes to disk serialization." As a result, the development team claims it will no longer need to delete characters or ships, and that it's now much less likely that they will need to delete planets. Helpfully, this change also brings with it a "proper versioning system" for save games - a huge boon for anyone who's ever attempted to find a particular game in Starbound's previously labyrinthine save file structure.

Additionally, Furious Koala brings difficulty levels to Starbound, and introduces permadeath for those players who feel that futuristic regeneration pods are just a tad too unrealistic for a game that includes force fields, laser swords and industrious bird people. Full details on Furious Koala can be found on the update's changelog.

↕
Four Awesomely Hilarious People Play Starbound
- Like?
kotaku.com
* http://kotaku.com/four-awesomely-hilarious-people-play-starbound-1508054376
Starbound is actually barely discussed in this one. Not that it matters. It's utterly brilliant either way.Read more... 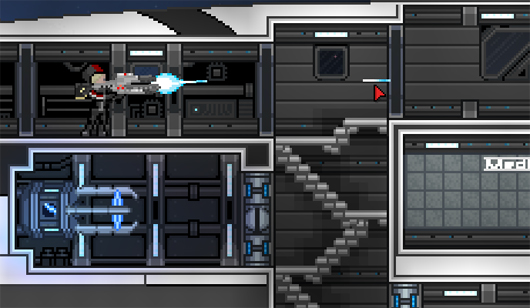 * http://www.joystiq.com/2014/01/21/starbound-mass-effect-edition-looks-well-worth...
An interesting mod for the Starbound beta incorporating several elements from BioWare's lauded Mass Effect series has been published online by a group known as Team SMEE. It's called Starbound: Mass Effect Edition and we're certain it's Shepard's favorite beta mod on the Citadel.

The most interesting inclusion is Mass Effect's Biotics, the special abilities unlocked in certain lifeforms through the integration of technology. Both Lift and Slow have been added to Starbound, though players need to track down and learn these techniques before they can employ them.

The mod also converts your personal ship into the Normandy - the original SR-1, to be exact, from the first Mass Effect. On top of the AI-controlled ship, the Asari, Turians and Human Alliance races are all represented here, as well as a slew of appropriate armor and weapon sets pulled directly from BioWare's series. Future updates are planned, and will add the Mako (why?) and Element-0 - a rare element that, when electricity is applied to it, allows for the creation of mass effect fields.

In order to install the mod, users must grab Kawa's Xbawks Mode Character Creator and the Simple Extended Character Creation Mod. Then head over to the Starbound forums and follow the installation instructions to get Starbound: Mass Effect Edition up and running. Good hunting, Commander.

Starbound was always going to be a game that players would want to re-build in their own image. A procedurally generated sandbox means systems. Lots and lots of systems. It means the community can change whatever they want, and the players have responded at a phenomenal rate of moddery. I’ve done ridiculous things to my game that I’d never recommend you do. I’ve added a Dubstep gun and a Vuvuzela*. But there are broader changes I’d happily recommend: tweaks to ship shapes, planet generation, better farming. There’s as much to explore in the modding scene as there is on Alpha Diadem 028 III C, and I’ve beamed down to have a look.(more…)

* http://www.joystiq.com/2014/01/14/next-starbound-patch-wipes-characters-and-worl...
A new update being planned for the ongoing Starbound beta will wipe all player data, forcing everyone to start from scratch once again. The update addresses a save file issue with the game, and the developer assures this is the last time it has to wipe player progress.

Those looking for some added difficulty should find it in a new permadeath mode, also coming in this update. Developer Chucklefish will add more weapons, decorative hats and up the rate at which players encounter NPCs on the game's various worlds.

Starbound is a 2D sci-fi exploration game full of randomized worlds. Players traverse the galaxy in their own personalized ships, beaming down onto worlds to explore and scavenge for crafting supplies. Earlier this month, Chucklefish announced over one million players had signed on for the beta, which is open to anyone who pre-orders the game.

In a post on the Starbound blog, the game’s development team have outlined coming fixes and additions to the next version of the game. Good news: they’re adding a permadeath mode, for those who want to add a little more risk to their galaxy exploration. Bad news: they’re kickstarting this new permadeath mode by wiping the entire universe, including player’s ships and characters.

It’s like playing alpha games is already a kind of permadeath mode.(more…)

So it turns out a lot of you like games about exploration and building things. Who knew? Starbound, the game that let’s you do that while travelling a universe of alien planets, has sold a million copies. That’s not bad for a game that only came out on December 4th.(more…) 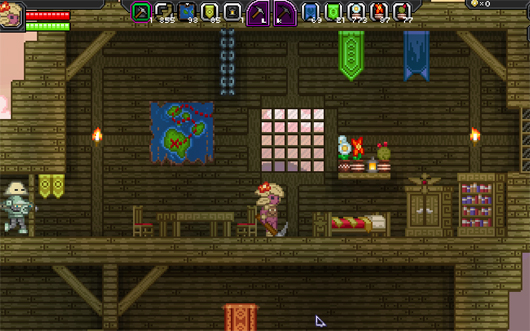 Over one million have signed up to explore Starbound
- Like?
joystiq.com

An ongoing beta is available to anyone who pre-orders the game. Over Starbound's pre-order period, Chucklefish secured over $1 million in revenue prior to the beta's launch in December.

In Starbound, players maintain a ship and are beamed down to randomized worlds in order to scavenge for supplies, hunt local wildlife and interact with the indigenous peoples of each land. Starbound also supports multiplayer and gives players access to a variety of different races and genders for their character. SPEND TIME WITH OUR MOTHERS AND OUR FRIENDS

Starbound is finally playable by the unwashed masses, and it’s already so magnificent that even the washed masses became unwashed masses after sitting transfixed by its exploratory glow for days. But this is just a beta test, and even then it’s only on phase one of three. There’s much more to come. Space combat! Planet-sized dungeons! A not-quite-so-mean difficulty curve! Why, someday I imagine we’ll even be able to build Starbound inside Starbound. Actually, who’s to say we haven’t done it already, that everything you see in front of you is nothing but a hyper-elaborate Starbound simulation? You’ll never escape from voxel games. You are a voxel game.

It hasn't been a week and someone's already put the TARDIS from Doctor Who in Starbound.
- Like?
nexusmods.com
* http://www.nexusmods.com/starbound/

* http://kotaku.com/it-hasnt-been-a-week-and-someones-already-put-the-tardi-147944...
It hasn't been a week and someone's already put the TARDIS from Doctor Who in Starbound. The game's also got other great mods since its December 4 launch, including a new Toxic planet type and a whole new family of gathering tools, all hosted on their own dedicated modding site—and this is just the first five days.Read more...

Starbound is a procedurally-generated universe, where you have a ship, a star-map, and an infinite number of planets to visit and plunder. It is a game that makes almost no definition between single and multiplayer, allowing you to bring your character across the void and back again, visiting the same places online and offline, and sharing those worlds with friends. Its first beta just welcomed weary travelers, and though it is missing a framework that would make it an easier game to follow, the foundation is strong. I’ve spent the weekend exploring the stars. (more…)

Watch Us Explore The Galaxy In Starbound
- Like?
kotaku.com

* http://kotaku.com/watch-us-explore-the-galaxy-in-starbound-1477387673
Is Terraria is too terrestrial for you? Does FTL not have enough tedious mining? Do you play Minecraft and just wish you could be a robot instead of Steve? Well Starbound can solve all your problems. Read more...


Starbound developer Chucklefish began sending out beta keys for the PC, Mac and Linux game today. Those who backed the space-faring exploration game should see a Steam key in their inboxes momentarily, and the developer says a direct download version of the game will be available "as soon as we are able to efficiently provide it."

The Terraria-like game's official site reveals that over $2.6 million was raised by 124,176 backers in the developer's ongoing crowdfunding efforts. Starbound features procedurally-generated worlds in which players must gather supplies to take on quests. The "story in a sandbox" game received a new trailer to commemorate the launch of its beta version, which features some of its side-scrolling action.

"Terraria-like" is a bit of an understatement

a spiritual successor to end all succeeded spirits